Google Creates A Messenger For Dogs

As it has become known recently, Google takes part in the development of a system that will let a dog contact with its accompanying man and give him messages. Such a news came from MIT Technology Review.

The system is called FIDO (Facilitating Interactions for Dogs with Occupations), and it is being developed by Georgia Institute of Technology. Google has given a grant to developers, and sent their staff member Ted Starner, who had previously worked on Google Glass, to participate in this project. 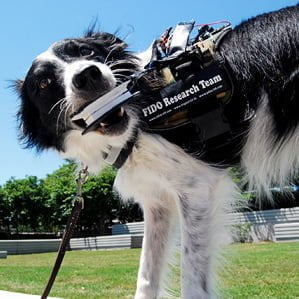 FIDO is based on the Arduino platform. It includes a sensor attached to a dog’s body (it can be a vest or a collar for example), and the means of communication. It is assumed, that the system will be used by dogs who seek explosives out, and dogs who serve for searching goods.

A dog is trained to activate the sensor in special situations: for example, when it detects explosives. To allow the load, a dog must do some action: to bite a place where the system is attached, or pull a lace with teeth (it is still unknown, which option will be used in the final version of the system). When the sensor is triggered, the dog’s owner will receive a message.

The first tests of this system have been already carried out by developers. Three different dogs took part in them, and they had tested four different types of sensors. The dogs were trained to activate a sensor quite quickly. But the tests have demonstrated, however, that FIDO still needs some improvements: an additional protection against damages, and an opportunity to charge a battery in the process of use.

The first version of the system allows a person to hear a beep in his earphones, when a dog passes him a message. The chances are that all next versions will transfer both a message and a video from a camera mounted on a dog’s body.

When a message is received from a dog hears a beep in the earpiece. It is possible that in future versions together with the message the person will transfer the video from the camera mounted on the dog’s body. FIDO is not limited to service dogs only, as it can be used by guide dogs as well.

Written by Alex Strike, a copywriter and a pro blogger of Writing-Help, who is interested in many fields, including innovative techs, concept gadgets, and sport cars.