What Is The Internet Of Everything?

As most are aware, the Internet is a global network of servers and personal computers (desktops, laptops, tablets, mobile phones, etc.); it allows humans to access and transmit information anywhere in the world. The Internet of Everything takes this one step further.

Whereas humans have traditionally been the ones behind the wheel, the Internet of Everything allows computers to take the reins without direct human influence: instead of a human user telling the computer to go to a given address, the computer does it, itself. Obviously humans will still be required to program the computers, however with computers being developed that can program themselves, humans may no longer need to take an active role in this process.

Advancements in microprocessor technology is the primary driving force behind the Internet of Everything. By developing processors that are smaller, cheaper and more powerful than previous models, computing and networking resources become ubiquitous to where tiny sensors can be embedded in every article of clothing, every product and even every person.

These computers would contain your medical history and current condition, your location accurate to the meter, financial information, daily activities, even what you see and hear and all of this information would be constantly relayed to the nearest data center where it would be stored and analyzed.

Though immature, these technologies are already extremely prevalent today. Every smart phone is a personal tracking device that sends logs of every keystroke and conversation you make — as well as your location — to your service provider. The elderly often have bracelets, necklaces or tags that contain their medical information.

Major Internet companies like Google and Facebook monitor all online activity from every individual who accesses the Internet. Now, with technologies like Google Glass, Google will see everything you see as you see it. 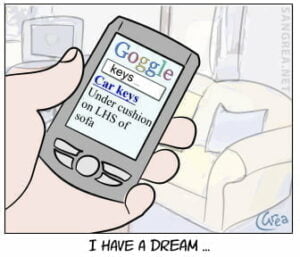 How it could Affect Us

This remains to be seen. While these advancements are certainly alarming for those who value their privacy, there is substantial good that can come from the Internet of Everything. If you are lost, injured, or attacked, having first responders who are immediately aware of your exact location may save your life.

Having your medical information known to first responders may ensure you get exactly what you need, when you need it, while drastically mitigating the chance of complications from treatment. A record of what you see and hear may be crucial to investigators in the event of a crisis or an attack.

Then again, these same governments and companies who collect and analyze your personal information may just use it to increase advertising effectiveness and track the activities of activists and political radicals.

From the inception of the commercialized Internet, it has provided universal access to all users to an immense amount of information. Throughout the years, technology has allowed for more information to be distributed to Internet users. Although there may be some security and privacy concerns and backlash from some users, further advancements will allow vital information to be accessed at the times we need it most.

This article was provided by Joe Restivo , editor of InternetPaymentServices.net, a blog about internet technology and internet security.