According to anti-piracy.nl, 12 “BigBang” eD2k servers are being offline for 2 weeks already, after their hosting provider received a cease and desist letter from the dutch anti piracy organization BREIN. 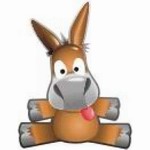 Once again, it shows that their news report is full of deception and misinformation.
BREIN claims that those eDonkey servers facilitate and provide illegal content which they offer by payment. Now how ridiculous is that!

Also, DonkeyServer 1-6 are down/offline, along with Byte Devils and some other servers which were the major ones. It’s unclear if it has anything to do with BREINs action. It could also mean that other servers decided to shutdown so people would move on to the serverless Kademlia (Kad) network.
This is good news only, no more servers is no more centralization. Kad is a completely decentralized network, which enables searches without the use of an eDonkey server.

Because of this BREINless action, users will move much quicker to the better Kad network, which is of course a good thing.
From now on it’s recommended only to use the Kad network in applications like eMule, aMule and MLDonkey. Forget the eD2k servers, many of them left are fake, setup by anti piracy organizations to monitor you.